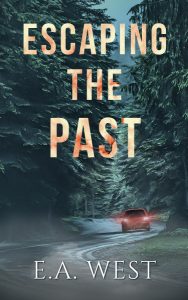 True love never dies, but can it overcome mistakes of the past?

When Felicia Coronado’s soon-to-be ex-husband kidnaps her daughter on a remote mountain road, she must rely on the assistance of a group of soldiers in the area for a training exercise. She’s stunned to discover the soldier in charge is the high school sweetheart she never thought she would see again.

Lieutenant Mark Benson never stopped loving Felicia, even after she dumped him before their senior prom. Now, six years later, he learns the truth behind why she left him. Can he forgive her for the past and give her a chance for the future once her divorce is final, or will he help find her missing daughter and leave Felicia behind?

Rain poured from the dark clouds, making the winding mountain road slick. Felicia Coronado’s hands tightened on the steering wheel as she fought back panic. Ramon’s truck hugged the rear bumper of her car. Speeding up didn’t increase the distance between them; it only made the car harder to control. She glanced in the rearview mirror, meeting her five-year-old daughter’s frightened brown eyes.

“Mama, why is Papa chasing us?” Raquel’s quivering voice sent an arrow straight through Felicia’s heart. Her daughter had already endured far too much fear in her young life.

“I don’t know, mija.” Yes, you do! He wants to kill you and take your daughter to Venezuela for who knows what horrible reasons. She would never let that happen. No matter what it took, she would protect her daughter from Ramon’s cruelty.

Felicia slowed to round a curve, and Ramon fell back. Her relief was short-lived as the road straightened again. She glanced back in time to see his pickup truck shoot forward.

She barely had time to brace herself before the truck connected with the back of her car. Raquel screamed as the car lurched forward, but Felicia couldn’t reassure her. She had all she could do to keep the car on the road.

Ramon rammed the back of her car again, sending it sliding across the wet pavement. A huge tree loomed ahead. She fought the wheel, but it was no use. The car slammed into the tree, crushing the right front corner. A second impact from behind smacked her head against the steering wheel, and blackness crept into the edges of her vision.

Before her sluggish thoughts could form into any kind of reassurance, Ramon had wrenched open Raquel’s door and was pulling the girl out of her booster seat. Felicia tried to protest, but Raquel’s screams drowned out anything she said. Adrenaline rushed through her veins, and she forced her way out of the car as Ramon carried her daughter away.

“Ramon! Let her go!” Felicia shouted into the storm. “You have no right to take her from me!”

He turned his cold eyes on her. “This child is my daughter. I have every right to take her.”

“You’re breaking the restraining order! Give Raquel back to me or you’ll face more charges.”

Ramon laughed, his expression full of hate. “Stupid woman. You think a piece of paper and empty threats will stop me from taking my daughter with me? You are a bigger fool than I thought.” He picked up his pace as he headed for the woods.

“Ramon!” Felicia’s scream didn’t stop him, and she watched helplessly as he disappeared into the forest with her daughter in his arms.