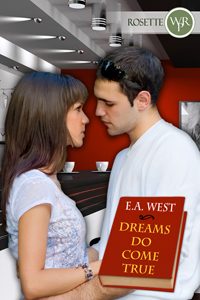 Aspiring author Cassie Teague has been rejected…again. As she considers giving up her dream of getting published, a handsome editor walks into her life and makes her wonder if God has more in store for her than just writing.

Acquisitions editor David Jameson wants more than just Cassie’s book. But will office politics destroy his hope for the future?

“Ms. West packed this short story with plenty of emotion. … I overall enjoyed this storyline and loved how the author threw a few twists and turns into the plot.”
Diana Coyle Night Owl Reviews

Cassie Teague arrived home after a long day of answering phones and scheduling patients at the dentist’s office and found three things waiting in her mailbox. She tossed the phone bill in the basket on the small table in the hall, the ad for used cars went into the trash, and the familiar manila envelope addressed in her own handwriting went back out the front door with her. Checking the postmark as she walked to the small café on the corner, she discovered the envelope had come from a submission she’d sent six months earlier. She couldn’t help wondering why it took three days for mail to go fifteen miles from Cincinnati to Brighton. The thickness of the envelope didn’t tell her anything; it could be her synopsis, first chapter, and a rejection letter, or it could be her submission and a letter requesting her full novel manuscript.

As she stepped into the café, she noted her best friend behind the counter filling an old man’s coffee cup. Gayle glanced at the envelope in Cassie’s hand and nodded toward the vacant end of the counter. Cassie went to the last seat in the row and laid the envelope in front of her. She needed Gayle’s moral support when she opened this one. The publisher she’d submitted to was the perfect match for her book, and she’d spent nearly a month on the submission package to make sure it was perfect.

Cassie managed a weak smile and prayed for strength as she picked up the envelope. A moment later, she pulled out her submission package and what appeared to be a form letter. She got as far as “We regret...” before she dropped the stack of papers on the counter and lowered her head to her hands with a moan. “Not again!”

The strip of bells hanging on the door jangled before Gayle could reply. She gave Cassie’s arm a consoling pat, and then went to tend the new customer.

Cassie brushed her long hair from her eyes as she lifted her head and reached for the rejection letter, hoping it contained some clue as to why they didn’t want her novel. Her gaze briefly went to the new customer. His gorgeous movie cowboy appearance caught her attention and made her heart do a two-step. Dark-haired and blue-eyed, he stood at least six foot two and had wide shoulders that tapered down to a trim waist. He’d tucked his white shirt into a pair of jeans that fit oh-so-perfectly on his hips. The sleeves were rolled up to reveal tanned, well-toned forearms. He smiled as he spoke to Gayle, and Cassie decided receiving another rejection letter was almost worth it to see this amazing specimen of a man.

She heaved a heavy sigh and returned her gaze to the paper in her hand. There were more important things to do than gawk at a guy who was probably married to a woman more beautiful than Cassie could ever hope to be. Probably more successful, too.

She’d just finished examining the useless form rejection when Gayle placed one of the café’s famous giant chocolate chip cookies in front of her.

Cassie set aside the paper and broke off a bite of cookie. “Why do I only get form letters? I mean, would it really be so hard to scribble ‘It’s not you, it’s us’ at the bottom of the letter before mailing it to me?”

Gayle leaned on the counter. “You’ve told me many times how busy editors are.”

“Yeah, but how am I supposed to ever know if it really is them and not my writing if all I ever get are form rejections? For all I know, my writing stinks and my plot makes watching paint dry interesting by comparison.” She sighed and ate another bite of the cookie. “Maybe I should just give up on my dream of getting published and resign myself to the fact that no one wants to read what I write.”

“You can’t do that!” Gayle said louder than Cassie would have liked. “You’ve dreamed of becoming an author since you learned the word, and you worked your butt off on that novel.”

Cassie blinked back tears of frustration. “And where has it gotten me? Thirty-seven rejections from agents and publishers without even a hint of why they don’t want my manuscript. Maybe God is trying to tell me I’m not meant to be an author. If that many people in the publishing world don’t want to read past the first chapter or so, it’s got to mean something.”

“It means the publishing world is a finicky place, and you should try again,” a masculine voice said. Cassie looked over in surprise as the movie cowboy continued. “Agents and publishers pass on good stories all the time. A lot of editors have readers who screen the submissions and only send on the ones they think the editor will like. It’s possible your manuscript hasn’t even been seen by the editor you sent it to.”

Instead of feeling irritated that he’d broken into her conversation, Cassie found his words even more depressing. “Great, even people who read for a living don’t like what I write.”

She dropped her head to her hands again and considered burning everything she’d ever written.

Gayle cleared her throat, and Cassie looked up, stunned to find the cowboy sitting on the stool beside her. He gave her a sympathetic smile.

“Don’t let the job title fool you. Most of the readers are interns trying to gain experience in the publishing world. They’ve been trained on what to look for in a submission, but they generally don’t have the instincts of an editor who’s been buying manuscripts for years.”

Cassie studied him, noting the lack of a ring on his left hand. Maybe something good could come of this day after all. “How do you know all of this?”

He grinned, and she melted. No one had the right to look that sexy without even trying. “I work at Turnip Press.”