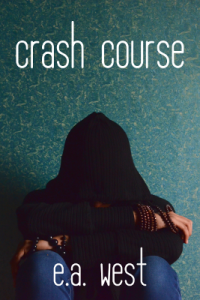 “Fine. I won’t have boys in my room, I won’t go to parties, and my social life is over except for church.”

Parties, dirt bikes, boyfriends… Angie has it all, but everything changes when her father kicks her out. Gone are the freedom and parties she thrived on. Now she has to survive a conservative mother with strict rules and a stepfather who may or may not like her.

Then she meets freestyle motocross rider Brady Scott. He’s gorgeous, talented, and shows her respect at every turn. There’s only one problem — his opinions of life are opposite hers. The more time she spends with him, however, the more she’s drawn to him.

As Angie struggles to find her place in two conflicting worlds, she gets a crash course in life lessons and has to make a difficult decision — give up the partying life to hang out with Brady and his youth group friends or continue down a dangerous path that could destroy her.

““Crash Course” is a great story about overcoming one’s self-doubt. … The beauty in the story is the integral part most characters play in Angie’s journey of self-discovery.”

I dragged my attention from the supercross race to see my father standing in the hall with his bleach-blonde girlfriend hanging on him. The woman’s skimpy shorts and deeply scooped tank top looked as if they’d been painted on. So trashy. I clicked off the TV and tossed the remote on the coffee table, shooting my father a disgusted look as I rose from the couch. It figured he would want some privacy when I was trying to relax. “Fine. I’ll be back in a couple of hours.”

“Howard!” the blonde whined, tugging on his arm.

He glanced at her then returned his cold gaze to me. “No, I mean you have to leave. Get out of here and don’t come back.”

My jaw dropped. “You’re kicking me out?”

“I thought you’d be happy.” Dad shrugged fleshy shoulders covered in a stretched out T-shirt. “You don’t like me, I don’t like you, and Lainey can’t stand you. If you leave, everyone’s happy.”

“Dad!” This couldn’t be happening. Where did he expect me to stay? I didn’t have a job, and most of my friends didn’t fall under the reliable category.

He let out an exasperated sigh. “Just go pack and get out of here.”

I glared at him and the blonde as I stormed past. Slamming the door of my room only sort of shut out Lainey’s whining. The one good thing about getting kicked out was never having to listen to her annoying voice again. I grabbed the black cordless phone from my desk and dialed my mother’s number. While I listened to it ring, I pulled a suitcase out from under my bed and set it on the twisted sheets and blankets. So much for being more important than my father’s revolving live-in girlfriends. I should have known they would come first eventually.

“Hello?” My mother’s familiar voice sounded as sweet and friendly as ever.

“Mom, it’s me.” I threw a couple of shirts in my suitcase. “Dad just kicked me out. Can you send me some money so I can get by until I find a job?”

Her gasp traveled clearly across the phone line from Virginia. “Did you say your father kicked you out of the house? You’re sixteen years old! What is he thinking?”

“I doubt he’s thinking much of anything other than how fast he can get rid of me. His latest girlfriend hates me, and I have to leave as soon as I’m packed.” I added a stack of blue jeans to the suitcase. “So, can you send me some money?”

“I’ll do better than that. If you can get to the airport, I’ll make sure there’s a ticket waiting for you.”

Move to Virginia? I paused my hurried packing and perched on the edge of my bed. “I’m not the naive twelve-year-old you sent out here. I’ve changed a lot in the last four and a half years.”

“You’re still my daughter. That will never change. Sebastian and I would love to have you come live with us again.”

I had doubts about that since my impressionable four-year-old and two-year-old half brothers already lived there. “Aren’t you afraid I might be a bad influence on Andrew and Toby?”

“I know you would never intentionally do anything to hurt them. So does Sebastian.”

My eyes stung at my mother’s gentle tone. I wasn’t sure my stepfather would be as willing to let me live with them as Mom thought. He’d married my mom when I was ten, and he hadn’t seemed to know how to raise a kid. At that point, I was the closest thing he’d ever had to a child. I seriously doubted he was ready for a teenager, especially one like me. “I guess I could come home, but like I said, I’m not the girl you remember.”

“I want you to come home, sweetheart. Can you get to the airport?”

“Yeah, I’ll find a way there.” My father yelled for me to hurry up, and I rolled my eyes. Couldn’t he shut up for once? “I have to go. Dad’s getting insistent that I leave.”

“Okay, I’ll make sure a ticket is waiting for you.” Mom gave me the name of an airline. “We’ll see you when the plane lands.”

I tossed the phone on my bed and threw some more clothes in my suitcase. After pulling my battered backpack out of the back of my closet, I shoved a few CDs, some photos, makeup, and hair accessories inside. I tossed a few more belongings in my suitcase and scanned my room. I didn’t see anything else I couldn’t live without. Not that I had a lot anyway. Most of my money went into maintenance and fuel for the dirt bike sitting in the garage, and Dad didn’t spend any more on me than necessary. I hated leaving my dirt bike behind, but I might be able to talk my mom into letting me come pick it up at some point. Or maybe I could get Sebastian to loan me enough to have it shipped. He had an impressive salary as an architect and could probably afford it with no problem.

I opened my door, and Dad glared at me. “Are you packed?”

“Yeah, I just finished.” I waved a hand at my suitcase. “I don’t suppose you could be bothered to take me to the airport, could you?”

“Why are you going there? You don’t have enough money to buy a ticket.”

“Mom’s buying it for me.” What hatred would he spew against Mom this time? He always had something to say about her. “She and Sebastian are going to let me live with them.”

Dad laughed. “She won’t want you for long once she finds out what you’re like.”

“She told me she didn’t care.” I slung my backpack over my shoulder and grabbed my suitcase. “She wants me no matter what I’m like, and she won’t kick me out because some bimbo doesn’t like me.”

The slap to my face didn’t surprise me, and neither did Dad’s intensified glare. “You may not live here anymore, but you won’t talk to me like that.”

“And you’ll never hit me again,” I said, ignoring my stinging cheek as I pushed past him. “Forget the ride. I’ll get there on my own.”

As I made my way through the living room to the front door, I ignored the insults and vile names Dad and his girlfriend yelled in my direction. Obviously, they wouldn’t miss me. I wouldn’t miss them, either.

The warm Southern California sunshine provided little comfort when I left the house and headed down the sidewalk. My father had changed in the last few years, but I hadn’t realized just how much until now. I’d gotten used to the drinking and abuse. I could even handle him trading live-in girlfriends every few weeks. But kicking me out because one of those girlfriends hated me? That was going too far.

A dark blue sedan pulled up to the curb before I reached the bus stop a few blocks from my father’s house. My current boyfriend, Marcus Talbot, leaned over to the open passenger window.

“Hey, Angie, you runnin’ away from home?”

“No, my dad kicked me out.” I stepped up to the car and leaned down to look inside. “Are you headed anywhere near the airport?”

“I can give you twenty bucks.”

He unlatched the door. “Hop in. I’m on my way to the airport.”

“Thanks, Marcus.” Once they were on the road, curiosity burned too strong to ignore. “So, where were you really going?”

“Around. Just looking for something to do or some trouble to get into.”

“You never have to look far for trouble.”

Marcus laughed. “My grandma says trouble is my middle name. So, where are you flying to?”

“Virginia. My mom and her husband are letting me live with them.”

“That’s cool. Maybe I’ll visit my cousin in Richmond and come see you while I’m out there.” He shot me a wounded glance. “But were you really going to leave without telling me goodbye?”

A twinge of guilt assaulted me. I hadn’t even thought about him until I saw his car. “I was going to call you when I got to my mom’s house. I didn’t have time to call anyone other than Mom.”

He lifted his arm, and I slid across the bench seat. The light ahead changed as he settled his arm around my neck, and he rolled to a stop. “I’m going to miss you.”

“Me too.” I moved even closer and placed my hand on his side as he lowered his head to kiss me.

A horn sounded from the car behind us. Marcus gestured to the driver as he kissed me again, and then he returned his attention to driving. I laid my head on his shoulder, wishing my father had waited until Marcus and I broke up to kick me out. Even though I knew the relationship wouldn’t last, I still liked spending time with him.

When we arrived at the airport terminal, Marcus pulled into the drop-off zone and retrieved my suitcase from the backseat. I set my backpack beside it on the curb and wrapped my arms around his neck. Despite our passionate kiss, I knew he wouldn’t miss me as much as he’d said during the drive. He also wouldn’t visit me, whether he went to his cousin’s place or not. He’d have another girlfriend in a week or so and forget all about me. Of course, I wouldn’t miss him much, either. Although he was fun to hang out with, I wasn’t in love with him or anything. As for a new boyfriend… I’d have to check out the possibilities before I knew how long it would take me to have one.

Finally, I stepped back and reached into my pocket. “I almost forgot to give you your gas money.”

He put his hand on my arm to stop me from pulling it out. “Keep it. I was just kidding about it, anyway.”

I gave him one last kiss that earned a glare from a nearby security guard, and then I shouldered my backpack, picked up my suitcase, and went inside.