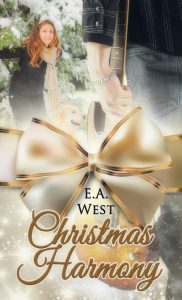 After a long semester, college student Tawny Beschen is more than ready for a relaxing winter break. Hanging out at rehearsals for her dad’s metal band is just what she needs. Familiar people, familiar music, and a familiar routine... It’s an overwhelmed autistic’s dream. Then the new guitarist walks in, and her safe, predictable world implodes.

Malachi Vandermeer is grateful for the opportunity to play guitar for Death Pardon. After a rough few years, the family-like relationship of the band is what he needs. Then he meets Tawny. Her sweet innocence creates an instant attraction, but his past makes him afraid to let it grow.

Can Tawny and Malachi overcome their challenges and have a merry Christmas together?

Tawny Beschen buried her face in her hands and tried to hold the tears at bay. She had come here to take a break from life while she recovered from the stressful semester, not cry and embarrass herself and her father. The weight of a hand rested on her back, and she looked up into her father’s gentle eyes.

Jack Beschen smiled from his place behind the steering wheel and gave her back a quick rub. “You’ll be all right. Let’s get inside so I can rehearse and you can relax.”

“Relaxing sounds good.” Tawny opened her car door and stepped out into the brisk, mid-December morning. She focused on releasing the tension. The relaxation techniques a counselor had taught her years ago never worked as well as her own ways of coping with stress.

Dad retrieved his guitar case from the trunk, and they headed into the recording studio.

The few people they passed greeted her father warmly.

Tawny couldn’t focus on small talk or even pretending to be social. Her overstimulated brain found the beige carpet much more interesting, and she couldn’t resist. Not when she felt the frustratingly familiar pressure of a meltdown building deep inside. If she let that rise to the surface, she would have to weather the emotional storm.

Her father guided her into the usual room his band rehearsed in, and she breathed a sigh of relief at the familiarity. She couldn’t deal with change right now, since it would undoubtedly push her over the edge. Thankfully, her dad and his bandmates understood autism. They always tried to help her relax if she started stressing too much or the anxiety got too bad.

Tawny looked around the room, noting the absence of people and the presence of the equipment. “What did they do, set up for practice and leave?”

Jack chuckled and set his guitar case on the floor. “No, they’re probably running a little late. We’ve been leaving the room set up lately so we can get into the music faster.”

She walked over to a microphone. As she ran her fingers along the stand, the quiet of the room seeped into her, calming her thoughts. The band’s heavy metal style had always soothed her frayed nerves. Her father understood because he found his music relaxing as well.

As Jack plugged his guitar into the amplifier, a handful of other people stepped into the room, talking and laughing.

From the voices, Max Osborn, Dale Hibbert, Alan Sanders, and Mike Hill were all there. That left Jimmy George as the only man missing, but the guitarist was almost always late. It was another part of the rehearsal routine.

She lifted her fingers from the smooth metal of the stand and stepped back. “Oh, sorry.”

“I think I’m brain dead,” she said, shoving her hands in the front pocket of her hooded sweatshirt.

Alan chuckled and adjusted the microphone. “You must be glad you’re on winter break, then.”

“Yeah.” She wandered away as the men prepared to start their rehearsal. Minutes after she stretched out on the floor and stared up at the ceiling with its recessed lights, someone else entered the room.

A stranger around her age. He was cute with his dark brown hair and a day’s growth of beard shadowing his jaw.

The sudden change in routine broke through her relaxed state. A rush of anxiety immobilized her. She curled into a ball on the carpet and pressed her sleeve-covered fist to her mouth to muffle the crying.

“Hey, Tawny, are you all right?” Her father’s quiet voice meant she hadn’t done a great job of hiding her tears. “You want to tell me about it?”

She squeezed her eyes shut. After a few breaths, she rolled halfway over and looked directly into her father’s face. “That’s not Jimmy.”

Dad’s features filled with sympathy, and he smoothed her hair back. “Oh, honey, I’m sorry. I thought you knew.”

“No! He’s still going strong.” Dad rubbed her shoulder. “He decided it was time to move on to other things, so we found ourselves a new guitarist a few months ago.”

“I…I think you told me about that when I was working on that paper that drove me nuts. Some guy with a Bible name or something.”

“That’s right. His name is Malachi Vandermeer. Would you like to meet him?”

Dale was talking to the new guy on the far side of the room.

Insecurity slammed into her. Would he want to meet her?

Her dad held his hand out. “It’s a little hard to introduce you if you don’t come with me.”

“He probably thinks I’m an idiot or a psycho.”

“No, he doesn’t.” Dad gave her a brief yet soothing hug. “When I came to see about you, Dale said he’d explain to Malachi.”

“I feel like an idiot.” Humiliation threatened to make her cry again.

“There’s no need for it. A lot of college students get stressed out with their classes, and they don’t have the added struggles you do. You rock, girl, for overcoming that and making the dean’s list anyway. Now, let’s go introduce you to the newbie so you can quit worrying.”

She dropped her gaze to the floor, more comfortable looking at the ugly utilitarian carpet than risking seeing what was in anyone’s eyes. Dale’s familiar skater shoes and an unfamiliar pair of sneakers came into view. They looked as if they’d walked across the country and back. Tawny stole a glance at their owner.

Tawny looked back down.

“Malachi, this is my daughter, Tawny. Tawny, meet Malachi Vandermeer, our new guitarist.”

“Hi.” She managed to make eye contact just long enough to discover he had the most gorgeous brown eyes she’d ever seen.

“Hey, Tawny, it’s nice to meet you.” Malachi’s smooth, rich voice sent tingles racing through her. “Your dad’s been bragging on you since I joined the band. How’d your grades turn out?”

“All A’s.” She glanced at her father as curiosity formed. How many others that she’d never met had heard about her college career?

“Thanks.” Tawny’s nerves jumped. “I’m gonna go back to the floor now. Have a good rehearsal.”

Malachi’s voice followed her. “Hey, Tawny, I have a cousin who’s an Aspie, and his daughter is autistic. Just thought you might like to know that I get it.”

She gave a single nod and stretched out on the floor again. Maybe she didn’t have to worry about him thinking she was crazy or stupid after all.