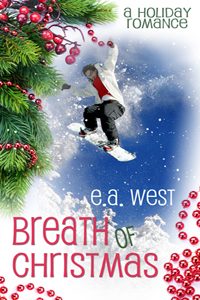 When Esther Beauchamp agrees to drive a snowmobile during the Santa Snow Challenge, she expects a problem-free weekend of transporting snowboarders. What she gets is the task of transporting a single snowboarder and babysitting his service dog while he’s on the slope.

Robbie Kendrick is instantly attracted to the pretty staffer who volunteered to help him during the competition. While she’s clueless about asthma, he appreciates her efforts to understand how it affects him and his snowboarding. Best of all, she treats him like a man who isn’t disabled and gets along great with his medical alert dog.

But when Robbie’s ability to compete is called into question, is it in God’s plan for him to give up the career he loves, or will his competitive spirit cause him to lose his chance at a future with Esther?

“It's an amazing story of how far willpower can carry us...or not.”
Donna B. Snow Christian romance author

The brisk air invigorated her as she watched the crowd arriving at Cedar Valley Resort for the Santa Snow Challenge and added to the festive atmosphere created by Christmas decorations on every building, a few trees, and the resort’s lone ski lift.

Esther’s heart thumped with anticipation. This was her first big event since moving to the small Colorado resort town. Never mind the fact that she’d never skied a day in her life; she knew how to drive a snowmobile, which was enough to qualify her for the position of competitor transportation at the slopestyle course.

She adjusted the safety orange jacket she’d been given and wondered how many people it would blind when the sun hit her. Black letters on the left front labeled her as “Staff,” as did the large black letters across the back. So far, she’d only been asked for directions by a few parents herding exuberant preteens, but she should soon meet the competitors.

Her boss and neighbor, Leonard Morris, approached from the left. The clipboard in his hand had seen better days, and it looked as if he’d tried to cram every paper from his overcrowded desk onto the thing. However, his cheerful personality more than made up for his lack of organizational skills.

“You get light duty for the competition.” He cocked his head to the side, one bushy gray eyebrow lifted in question. “By the way, do you like dogs?”

“Because you’re going to be spending a lot of time with one this weekend.” He shuffled through his papers and unearthed a photo. “This is Molly.”

Esther accepted the picture and studied the large black Lab seated beside a handsome blond man in his mid-twenties with hazel eyes and an athletic build. Try as she might, she couldn’t figure out what a dog had to do with shuttling competitors to the top of the course. She handed the photo back and studied her boss. “Cute dog, but why are you telling me about her?”

“The man in the picture is Robbie Kendrick.” Leonard tucked the photo into the pile on his clipboard. “He’s one of the snowboarders, and you’ll need to keep an eye on his dog while he’s doing his runs.”

What was so special about this guy that his dog warranted a babysitter? “What about the other competitors? I thought I was going to be busy running people up to the top of the slope.”

“That was the original plan, but it changed.” Leonard led her away from the growing crowd. “Look, Esther, Molly is Robbie’s service dog. When he’s not on the course, he’ll need her by his side. That’s where you come in. You’ll take them both up to the top, and then you’ll come back down here with Molly and meet Robbie when he finishes his run. I’ve been assured his coach will be at the top to help him out if necessary between the time you drop him off and the time he joins you at the bottom.”

“Wait, one of the snowboarders needs a service dog? Should he even be competing?”

“Molly is a medical alert dog, and Robbie and his coach are the ones who came up with this plan, so I assume they know what they’re talking about.” Leonard shuffled through the papers again, but came up empty handed. “I have a doctor’s note for him somewhere clearing him to compete, but I must have left it in my office. Oh, well, you don’t need to see that, anyway. The important thing is Robbie’s the only competitor you’re transporting.”

“OK, let me get this straight.” Esther rubbed her forehead. “I’m responsible for one snowboarder and his dog. While he’s doing his runs, I’ll be dog-sitting at the bottom of the course. Is that right?”

Leonard gave her a huge grin. “You’ve got it.”

“So, what happens if he doesn’t make it through to the finals Sunday? Does that mean I’m out of a job?” Although this gig was for one weekend only, the extra cash would help pay off the student loans that lingered from earning her computer science degree.

“No, I’ll find something else for you to do if that happens.” Leonard winked, a teasing twinkle in his eyes. “I doubt you need to worry, though. Robbie’s been competing for years, and he’s been in the finals of every competition he’s entered in the last two years.”

Suddenly, she wished she knew more about winter sports. Ever since she moved to Cedar Valley a month ago, she’d been listening to people talk about the Santa Snow Challenge and the competitors they expected to see. Esther had never heard of any of them, but it quickly became clear she was a minority in this small ski resort town.

The radio at Leonard’s hip crackled to life, and he responded to the call from one of the security personnel. As soon as he finished answering the man’s question, he focused on Esther. “You need to be at the registration desk in the lodge in about half an hour. Robbie and his coach are supposed to meet you there.”

Leonard wandered off, speaking in to his radio as he walked, and Esther turned towards the huge lodge constructed of logs. The rustic building nestled in the valley between mountains welcomed visitors and offered the promise of a warm fire and comfortable chairs after a long day on the slopes. The other resort buildings had the same rustic, log-cabin look, and the design elements had bled over into the rest of the small mountain town. The job offer by a small software company in downtown Cedar Valley had originally brought her here, but the laid-back atmosphere of the area had convinced her to take the job.

She sidestepped a couple of kids chasing each other, her thoughts going to her charge for the weekend. Why would a snowboarder need a medical alert dog?